In the fall of 1941, following the German invasion of the Soviet Union, Ivan K. Voskobinkov, the mayor of Lokot, a town with about 6.000 inhabitants just south of Bryansk and on the edge of the Bryansk forest, ordered a small militia to be raised following numerous attacks on the railroads in the area by partisans. Initially the militia numbered no more than 400-500 men.
The unit was formed December 1941, armed only with light weapons and dressed in a mix of Red Army, Tzarist, German and civilian clothes. It was given the task of combating the partisans in the Lokot area, as well as garrisoning the Brassovo railroad station. This volunteer unit was very successful in its tasks, enough so to warrant a special team of Soviet soldiers to be sent to the area to assassinate the mayor. They, together with partisans from the area, attacked the Lokot town hall. The mayor, who was only defended by a few militiamen, was killed along with most of his staff in the battle that followed. One member of Voskobinkov’s staff, Bronislav Vladislavovich Kaminski, had left the building shortly before the attack and took over afterwards as mayor and commander of the militia.

Bronislav Kaminski was born is St. Petersburg in 1903 to a Polish father and German mother. He was a chemical engineer and, as a foreign born "intellectual", was regarded as unreliable by the Soviet authorities. Accordingly, he was arrested and sentenced to five years hard labour in the Gulag as a spy for the west. After his release, he was sent to Lokot a few months before the Germans launched Operation Barbarossa.
Upon assuming command, Kaminski promptly expanded the Lokot militia and worked hard at acquiring better equipment, especially arms, for them. He sent men to comb the area for abandoned equipment that could be repaired and used. He also tried to get equipment from the Germans, both through official channels and directly from the German units his men were used to protect (usually Organisation Todt units doing construction for the Wehrmacht).

Heeresgruppe Mitte now began to take notice of the Kaminski militia, especially after a large battle between the militia and about 3.000 partisans in the Komaritchi area. After this event, Kaminski received even more autonomy for his area, which included much more territory than the town of Lokot, controlling 1.700.000 people. For its part, the Kaminski militia also began taking part in major anti-partisan operations along with Axis forces, but the price of this expanding relationship included the incorporation of a small German liaison staff into his units.

A memorandum from 2. Armee criticized the measures taken so far as inadequate, suggesting increased autonomy for the Lokot region, noting "the Russian must know what place he will occupy in the future Europe. He will gladly do this under German leadership, but not as a slave".

The Germans launched a major anti-partisan operation, Vogelsang, in the forest just north of Bryansk 5 June 1942, forming Gruppe Gilsa II, commanded by Generalleutnant Werner Freiherr von und zu Gilsa, to handle the operation. This kampfgruppe included one Panzer regiment from 5. Panzer-Division, elements of 216. Infanterie-Division, the Kaminski militia and elements of the Hungarian 102. Light Division and 108. Light Division. The Kaminski militia was split up into company-sized units serving as translators, guides and combat troops. The operation originally took place in the Zhizdra region, but expanded into other areas during the summer and fall until the kampfgruppe was disbanded in October. The official results of this operation, the first major one where Kaminski's troops participated, were 1.193 partisans killed, 1.400 wounded, 498 captured, 12.531 civilians "evacuated". The Axis suffered 58 killed and 130 wounded from a strength of over 6.500.

Kaminski exercised his autonomy in the Lokot Oblast (district), which was much larger in reality than it was on paper, to set up what was almost a state of its own, with many small enterprises, including a few privately owned and run industries. He even reopened some churches and primary schools. Although the plans to make his administration a "Bezirksverwaltung" were not realized, the Germans did not interfere as long as he kept their transports safe and delivered the required food quotas to the Wehrmacht. In addition, Kaminski attempted to continue the Narodnaya Socialisticheskaya Partiya (Russian National Socialist Party, later renamed Nacional-Socialisticheskaya Rabochaya Partiya Rossia, National-Socialist Labour Party of Russia) of Voskobinkov, but with very limited success.

Kaminski then renamed his forces Russkaya Osvoboditelnaya Narodnaya Armiya, RONA (Russian Peoples Liberation Army) It is sometimes referred to as POHA after the how RONA looks when written in Cyrillic letters. The Germans referred to it as the Kaminski Brigade. The RONA was now greatly expanded by many new volunteers, including former partisans and former POWs as well as conscripts from the Lokot region. It should also be noted that not only Russians served in the RONA, it also included Belorussians, Ukrainians and a few Poles.
It also received some heavy equipment, including some pieces of artillery and 24 T-34/76 tanks.

During the summer of 1943 the Kaminski Brigade began suffering an alarming increase in desertions due to the successes of the Soviet Red Army as well as concentrated efforts by the partisans to recruit its men. There were also several attempts made on Kaminski's life. One such conspiracy involving numerous officers was discovered shortly before the attempt  on his life could take place and was ruthlessly suppressed. Oberst Hermann Tescke, serving on the Generalstab General Transportwezen Heeresgruppe Mitte, reported seeing four former staff officers hanging from a gallows outside Kaminski's headquarters.
Following these events the German liaison staff was greatly expanded in an attempt to minimize the risk of mass-desertions and also bring a better structure to the brigade.

The Soviet offensives following the failure of Zitadelle forced the Kaminski Brigade to leave its home area, along with many civilians (at least 50.000 according to most sources), in the fall of 1943. It travelled west, mostly on foot, to White Russia. This move away from home caused a lot of desertions and other troubles in the unit, making it less and less reliable. Once in White Russia the commander of 2. Regiment threatened to join the partisans and it is said that Kaminski flew to its HQ and strangled the commander in front of his unit.
The Brigade was stationed in Lepel in the Polotsk area, which was almost completely in the hands of the partisans and was soon once again in combat against them.

It was renamed Volksheer-Brigade Kaminski in shortly before being taken over by the Waffen-SS July 1944, as Waffen-Sturm-Brigade RONA, with Kaminski himself receiving the rank of Waffen-Brigadeführer der SS. The SS had plans to expand the brigade to a full division, the 29. Waffen-Grenadier-Division der SS (russische Nr. 1). 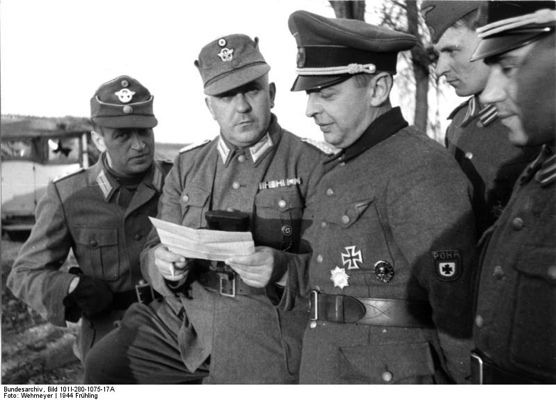