The Panzer-Brigade 150 (in some sources listed as the 150. SS-Panzer-Brigade) was formed to take part in the Ardennes offensive, with the task of capturing the bridges at Ama, Engis and Huy. The 2.500 men in this unit came from all parts of the Wehrmacht, 1.000 from the Heer, 500 from the Waffen-SS, 800 from the Luftwaffe and 200 from the Kriegsmarine.
It is famous for having including some English-speaking soldiers wearing US uniforms, these soldiers in Einheit Stielau were meant to cause confusion behind the US lines for example by misdirecting traffic.
Apart from a few captured US vehicles, some of the vehicles in this unit were modified to look like US vehicles, for example the Panther tanks were modified to look like M10 tank destroyers. Two captured Sherman tanks were also transferred to this unit, however none of them saw any action due to technical problems.

When Unternehmen Greif started, the brigade was held up in the massive traffic jams which caused major problems to the entire offensive. After loosing two days this way, the original goals of the brigade was more or less given up and it was to fight as a regular formation.
It was given the task of capturing Malmedy, but a deserter warned the US forces of the plans. The attack was met with heavy fire and was the Germans were forced to retreat. The US artillery took a heavy toll on the unit even when it was withdrawn from the actual fighting, the wounded included Otto Skorzeny himself who was hit by shrapnel.
The brigade was finally withdrawn from the front lines on 28 December, being replaced by 18. Volksgrenadier-Division.

44 Germans wearing US uniforms managed to slip through the US lines, 18 of its men were captured and executed as spies.
Otto Skorzeny was tried and aquitted postwar for the actions of the 150. Panzer-Brigade during the Ardennes offensive along with several others from the unit. The below newspaper clipping is from the New York Times 10 September 1947. 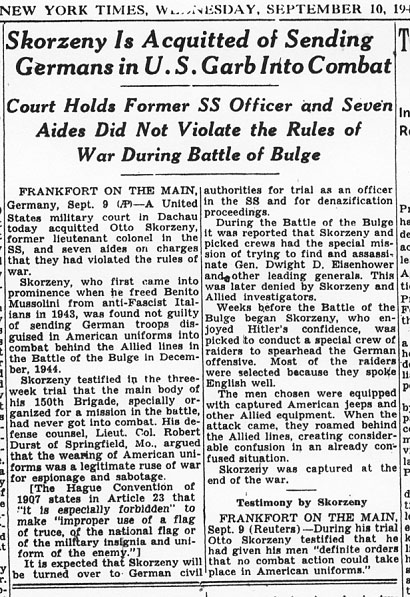 See also the US Army Judge Advocate's review of the Skorzeny trial.

One of the Panther Ausf. G converted to look like American M10 Tank Destroyers 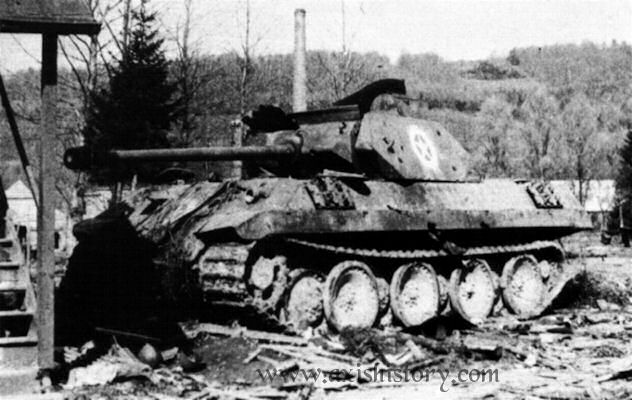