On 1 August 1944 the Warsaw uprising began when the Polish Home Army rose in Warsaw to establish an independent Poland before the Soviet Red Army arrived. RFSS Heinrich Himmler placed SS-Gruppenführer Heinz Reinfarth in control of  Kampfgruppe Reinefarth, made up of the SS and Polizei units sent from Posen to Warsaw, these included the Kaminski Brigade and the Dirlewanger Brigade. The entire Kaminski Brigade was not sent to Warsaw. Instead a 1.700 men strong regiment, together with four T-34 tanks, one SU-76 assault-gun, and two 122-mm cannons, the commander of this regiment is in some sources referred to as Frolow, in others as Vrolow and in yet others as Trolow.

This detachment arrived in Warsaw 4 Aug and was given the Ochota district. It was to take part in an attack 08:00 the following day, attacking the weakest part of the Polish defences which were manned by only some only some 300 men.  The unit, however, was not at its assigned positions at 08:00 and was not actually located until 09:30 when they were found away from the frontlines and busy looting abandoned buildings.  After they were finally formed up and assaulted towards their objective, they only managed to advance some 275 meters by nightfall.
During the attack some men from the Kaminski Brigade entered the Radium Institute, a hospital for female cancer patients, and began raping both patients and staff, killing those who protested. Before it was set on fire, the hospital was also looted. This atrocity left some 30 people dead.
This incident was only one example of the murdering, looting and raping committed by this unit in Warsaw, the war diary of 9. Armee dryly notes: "The 1st Regiment Kaminski ... has drunken itself by way of the Reichstrasse up to the Machorka Factoy". Kaminski himself also took part in the looting, saying he was collecting for his "Russian Liberation Fund".

General Rohr, commander of the southern sector in Warsaw, demanded that SS-Obergruppenführer Erich von dem Bach-Zelewski, the overall commander of the German forces in Warsaw, remove the Kaminski Brigade from Warsaw immediately. Bach-Zelewski himself also wanted to get rid of that troublesome unit which disrupted his plans for suppressing the rebellion. So, as soon as reinforcements arrived, it was withdrawn from the fighting. Kaminski himself was called to Lodz to attend a SS leader's conference.
What happened next is not totally clear. Some sources say he was placed in front of a military tribunal and then shot by a firing squad, others that he was shot when he was captured by the Gestapo. The official version was that he was killed by Polish partisans in an ambush. The death of Kaminski brought the plans to expand the Kaminski Brigade to a division to an end. In contrast to Kaminski, SS-Gruppenführer Reinefarth was awarded Oakleaves to his Knight's Cross for his part in fighting the uprising.
The reason or reasons for his execution are unclear, but the most likely explanation is probably that Himmler felt he could not have two leaders for the (mainly) Russian forces fighting for the Germans and, when forced to choose between Kaminski and the former Red Army General Andrei Andreivich Vlasov, Himmler chose the latter. There have also been suggestions that Kaminski's forces raped and killed two German women, members of the Kraft durch Freude, during their time in Warsaw. If true, this could have been a reason for the execution.

The regiment had suffered about 500 men killed or wounded (30% of the unit) during the fighting in Warsaw and was now little more than an armed mob. It was sent to Strawiki and later to the Kampinos Forest to help seal of Warsaw. During their stay in the forest they were attacked by Polish partisans led by Lieutenant Colonel Adolf Pilch, leaving 100 men dead and 200 wounded.

In December the remains of the once proud RONA was sent to join the forming divisions of General Vlasovs Russkaya Osvoboditel'naya Armiya (ROA/POA). Vlasov had placed Colonel Sergei K. Bunyachenko in charge of forming the first division and when Bunyachenko saw the men from RONA he shouted to the German liaison officer: "So that's what you're giving me, bandits, robbers and thieves! You'll let me have what you can no longer use!".
All RONA officers except the able Major Kostyenko, were removed from the unit and this ended the history of the Russkaya Osvoboditelnaya Narodnaya Armiya.
The number 29 was given to Waffen-Grenadier Division der SS (Italienische Nr 1).

Numerous crimes during the crushing of the Warsaw uprising as described above, sometimes referred to as the Ochota massacre.

A collar insignia with crossed swords over a maltese cross was produced but not issued. 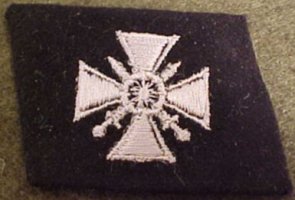 An armshield with the text POHA (actually RONA but in Cyrillic) in yellow on black above a black Cross of St. George on a white background was used. 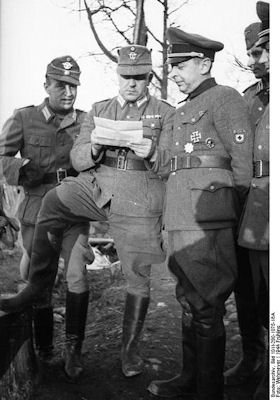 Soldiers from the unit during the Warsaw Uprising, Yurii Frolov in the center. The soldier on the right wears the ROA sleeve badge. 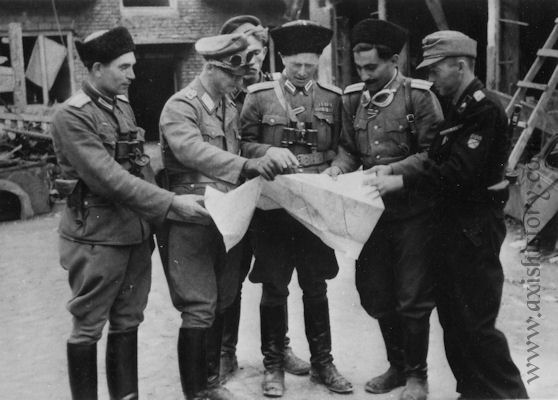