The 25. Waffen-Grenadier-Division der SS Hunyadi (ungarische Nr. 1) consisted of Hungarian volunteers and conscripts including a large number of solders from the Hungarian 13. Infantry Division.
It suffered 800 killed and 650 wounded 27 November 1944 in a US air attack on a train used to transport the unit.
It was still training when the Red Army entered Silesia and it retreated to Bavaria and later to Austria. Two combat-ready battalions remained in Silesia for about a week seeing heavy action and were destroyed. In Austria it fought against forces from the US Third Army before surrendering 4-5 May near the Attersee.

Johann (or János) Hunyadi (ca. 1385 – 11 August 1456) was a Hungarian military leader who in 1456 devastatingly defeated a Turkish army that lay siege to Belgrade. The symbol of the Hunyadi family, a black raven holding a ring in its beak, was to have been used on a shield in the Hungarian national colors of red, white and green as the division’s armpatch, but this was probably never worn.

A collar insignia with a "H" was issued. 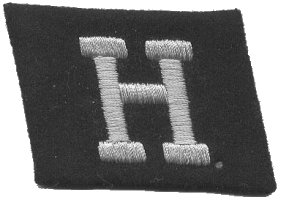 1. A third battalion was created in the infantry regiments in February 1945 when additional Hungarians were added to the division. These men were orginally assinged to planned Waffen-SS units that were not realized.