The 22. SS-Freiwilligen-Kavallerie-Division (usually listed as 22. SS-Freiwilligen-Kavallerie-Division Maria Theresa but the usage of that honor title is not supported by any primary sources located so far) was formed May 1944 in the area around Kisber, Hungary, with SS-Kavallerie Regiment 17 (from Florian Geyer) as nucleus. The bulk of the soldiers in the division were Hungarian volksdeutsche (ethnic Germans) originally drafted by the Hungarian Armed Forces who were transferred to the Waffen-SS following an agreement between Germany and Hungary.
In September 1944 a kampfgruppe from Maria Theresa consisting of SS-Kavallerie-Regiment 52 along with supporting troops, commanded by SS-Hauptsturmführer Toni Ameiser and entitled SS-Kampfgruppe Ameiser was sent to Romania. There it failed to link up with LVII Panzerkorps and instead fought alongside Hungarian troops. The advance of the Red Army led to the encirclement of the Kampgruppe 2 October and soon after it was split in two. One part of it was led by SS-Haputsturmführer Harry Vandieken and managed to fight its way to the Harmas river where they managed to swim across to join the German forces on the other side.
The other part was led by Ameiser was not so lucky, but managed to survive behind enemy lines until it could reach the German lines south of Budapest 30 October.
The battle ready parts of the division, which was still in training, were sent into Budapest in November 1944. There it was encircled along with the rest of the Axis troops in the Hungarian capital and was destroyed, only some 170 men making it out of the encirclement.

While the Corps was still in the process of being transferred, we were once again ordered to take up stationary positions, to our great disappointment. The cavalry divisions of the Waffen-SS were fighting in the metropolis of Budapest. Every cavalryman knows that no good could come of that, and, as it turned out, nothing did. The SS divisions were encircled ... My Cavalry Corps launched a night attack in an attempt to relieve them, but it was too late, and the Russian forces were too powerful. Although we managed to fight out way to the city limits, only 100 or so cavalrymen, under the command of the famous rider Staff Colonel von Mitzlaff, were able to break through to us. The subsequent battles, in the course of which my Corps was under the command of 6th SS Panzer Army, might have turned out quite differently had the two SS cavalry divisions been deployed to full advantage as cavalry divisions, instead of being ordered to hold Budapest. (1)

The survivors, along with those who had not been sent into Budapest were used to form 37. SS-Freiwilligen-Kavallerie-Division Lützow, with the remnants of the Flak units being transferred to 32. SS-Freiwilligen-Grenadier-Division 30 Januar.

The division was named after Empress Maria Theresia (1717 – 1780), a Roman-German empress and hereditary daughter of Emperor Karl VI, who carried out important interior reforms during her reign. Married to the later Emperor Franz I., she ruled the Habsburg lands, which she defended in the Austrian War of Succession, although she later lost Silesia to Emperor Frederick the Great. The Empress’ favorite flower, a cornflower, was adopted as the symbol for the division’s collar patch. (Which was definitely manufactured and worn, unlike the division’s projected armpatch of a red, white and green shield, which was to incorporate the cornflower design as well and intended to be worn by the Hungarians serving with this division.)
It should be noted that though the honor title is included in most books the usage of it has not been not supported by any primary sources located so far.

A collar tab showing a corn flower was produced but rarely used. 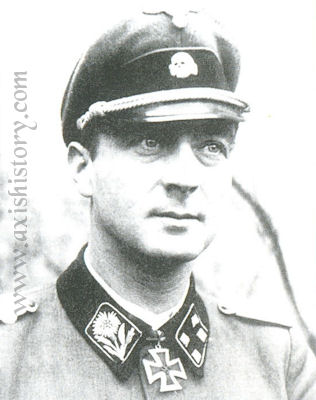 Soldiers of 22. SS-Freiwilligen-Kavallerie-Division in October 1944, note the Hungarian Nimrod anti-aircraft tank in the background 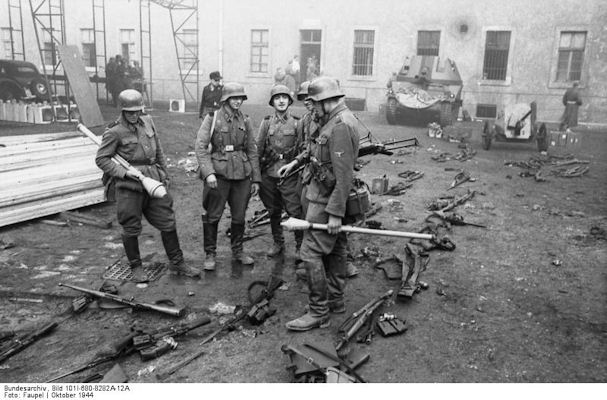