The 14. Waffen-Grenadier-Division der SS (ukrainische Nr. 1) was formed in April 1943 from volunteers from western Ukraine (known as Galicia when it was controlled by Austria-Hungary), including Polizei Bataillon 201, the Volyn Battalion (also known as the Ukrainian Self-Defence Unit, 31. SD Punitive Detachment) and the Ukrainische Schutzmannschaft Bataillon 204. The division was made up of Eastern Catholics and was allowed chaplains. Training of the troops began in Debica before the division was moved to Silesia April 1944 for further training.
By early 1944 the division was still in training but the SS-Kampfgruppe Beyersdorff was formed from the combat ready components including Waffen-Grenadier-Regiment der SS 29, Waffen-Grenadier-Regiment der SS 30 and miscellaneous support elements under the command of SS-Obersturmbannführer Friedrich Beyersdorff. The Kampfgruppe was used for anti-partisan operations in southeastern Poland.

In a speech to officers of the division in Neuhammer on on 16 May 1944 RFSS Heirich Himmler commented on the murder of the Ukrainian Jews stating:

Your homeland has become so much more beautiful since you have lost - on our initiative, I must say - the residents who were so often a dirty blemish on Galicia's good name, namely the Jews (3)

It was sent to the front at Brody in Ukraine in June 1944 where the inadequately armed division was almost destroyed (only 3.000 reached the German lines) after being encircled.

The below description of the divisions performance during the battle of Brody is quoted from the Knight Cross recommendation of SS-Brigadeführer Fritz Freitag written by RFSS Heinrich Himmler on 30 September 1944:

Up until the last battle, the division consisted not only of German soldiers, but also of Ukrainians from Galicia.These Ukrainians are soft inside and fickle, and lack much in comparison to fighting German soldiers.
The holding together and leadership of such men who are not used to war and lack hardness, and over and above that the carrying out of the most difficult orders in battle, such as those of the Brody pocket, requires the most of a responsible leader.
During the further continuation of the battle, numerous volunteers of the division fled due to their inner cowardice, and in some cases used weapons to threaten their leaders and NCO's. During this crisis, it was again the decisive presence of the divisional commander, who was there in person to re-establish the situation by inflicting the required brutal measures against any whiners, that saved the situation.
[…]
Whenever the division was deployed in the focal point of the battle, and its success recognized and recorded, it can only be attributed to the service of the German leaders who were lead by their divisional commander. (5)

It was soon rebuilt and elements of it was used to combat the Slovakian uprising in 1944 as SS-Kampfgruppe Wildner and SS-Kampgruppe Wittenmeyer before it was sent to Sovenia to fight the partisans.
The division was transferred to the forming Ukrainian National Army under General Pavlo Shandruk in April 1945.

Adolf Hitler spoke about the division during a military briefing:

Either the unit is reliable or it isn't reliable. At the moment I can't even create new formations in Germany because I have no weapons. Therefore it is idiocy to give weapons to a Ukrainian division which is not completely reliable. I would much rathger take their weapons away and set up a new German division. I assume that it is outstandingly equipped, probably much better armed than most of the German divisions we are creating at the moment. (1)

On 28 February 1944 the Polish village Huta Pieniacka was attacked, the inhabitants killed and the village burned down and it is generally accepted that soldiers from this division was involved though Ukraine sources disagree on this, instead placing the blame with German-manned units. The estimates of victims range from 500 to over 1200. (4)

In the report from the Commission of Inquiry on War Criminals in Canada (Deschênes Commission) 1985-1986 the Honourable Justice Jules Deschênes commented on the unit and the men from it who later moved to Canada:

While in Italy these men were screened by Soviet and British missions and neither then nor subsequently has any evidence brought to light which would suggest that any of them fought against the Western Allies or engaged in crimes against humanity. Their behaviour since they came to this country has been good and they have never indicated in any way that they are infected with any trace of Nazi ideology.
[...]
From the reports of the special mission set up by the War Office to screen these men it seems clear that they volunteered to fight against the Red Army from nationalistic motives which were given greater impetus by the behaviour of the Soviet authorities during their earlier occupation of the Western Ukraine after the Nazi-Soviet Pact. Although Communist propaganda has constantly attempted to depict these, like so many other refugees, as "quislings" and "war criminals" it is interesting to note that no specific charges of war crimes have been made by the Soviet or any other Government against any member of this group. (2)

This division was, for a while known as Division “Galizien”, which is German for “Galicia”. Not to be confused with the Spanish region of the same name, this refers to a region in central Europe now divided between Poland and Ukraine. While the division was in fact recruited from Ukrainian volunteers, it was initially declared a “Galician” unit purely for reasons of official Nazi racial politics. 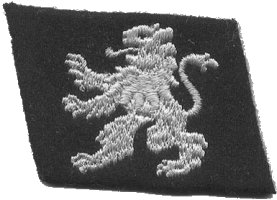 A soldier from the division wearing the special lion collar tab 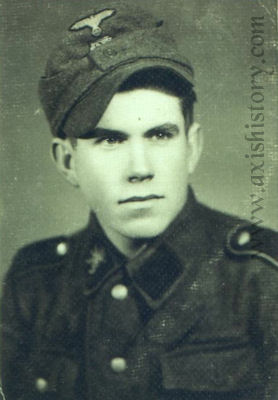 Two sleeve badges were worn by the division, the first one had a golden rampant lion with three golden crowns. In April 1945 when it was transferred to the Ukrainian National Army (UNA) and became 1. UNA Division a new sleeve badge started to be used displaying a trident on a gold and blue shield with "YBB" above. 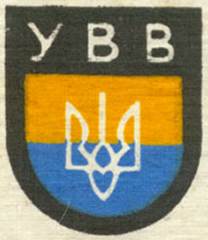 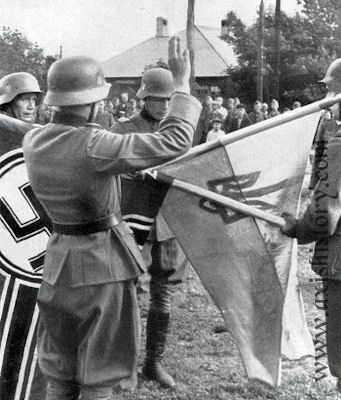 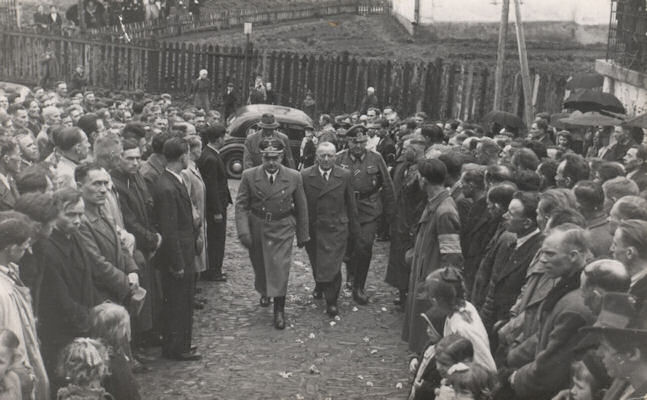 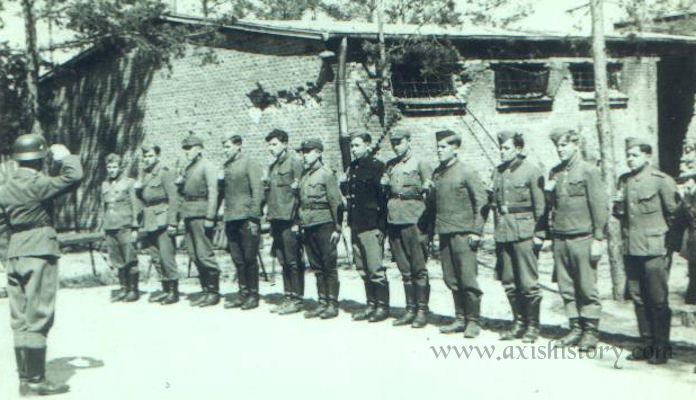 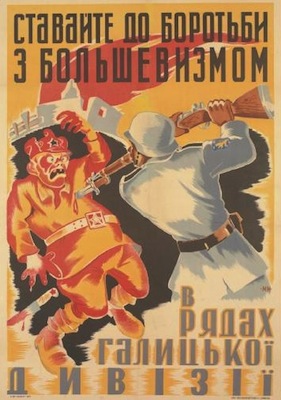 Memorial to the Ukrainian volunteers in Lviv 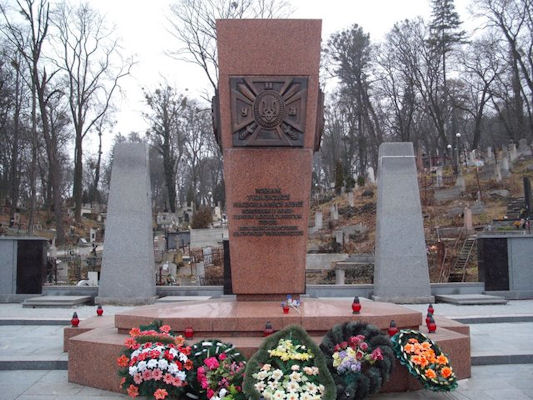 A memorial to the victims of the Huta Pieniacka massacre 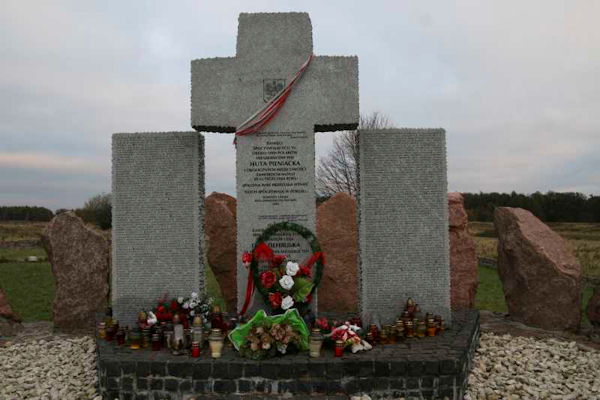 (Courtesy of Stanisław i Andrzej Tomczakowie)