The origins of the 12. SS-Panzer-Division Hitlerjugend can be traced back to late 1942 and early 1943. In all probability, the idea to create a "Hitlerjugend" (Hitler Youth) division was first tabled by SS-Gruppenführer Gottlob Berger for Hitler's consideration sometime in January of 1943. His vision called for the drafting of all HJ members who were born in 1926 and assigning them to a "Hitlerjugend" combat formation. Hitler liked the proposal and ordered Berger to commence organizing the division. The official order was issued on the 10th of February, 1943. Berger, probably thinking that, because the "HJ division" was "his" idea, nominated himself to be the first divisional commander of "Hitlerjugend". Much to everyone's amusement, Himmler politely declined Berger's candidacy a week later. Himmler gave that duty to SS-Oberführer Fritz Witt instead; a former HJ member.

In April of 1943, Hitler signed off on a number of additional decrees relating to the formation of the "Hitlerjugend" Panzergrenadier-Division; though it need be noted that Joseph Goebbels has serious reservations about the whole undertaking. One of Hitler's provisions called for the German Reichsarbeitsdienst (RAD) to release a number of HJ members for immediate transfer to the new embryonic HJ Panzer Grenadier Division. A number of pre-requisites however had to be met before a final transfer to the HJ division was officially approved:
* a minimum height of 170cm/5ft.7in. was required for HJ Division infantrymen;
* a minimum height of 168cm/5ft.6in. was required for HJ Division armor, FLAK, etc., troops; and,
* all recruits would undergo an initial six week, pre-basic WEL training camp.

On May 1st, 1943, the first group of 8.000 HJ volunteers reported to the WEL camps. Of note is that of the 8.000 HJ boys, 6.000 were sent to the WEL camps and 2.000 were directed to attend advanced or special military training camps. Because the planning officials were not able to adhere to their desired six week training classes (and probably because they were under great pressures to expedite the training and subsequent combat availability of the new HJ division), they shortened the training time by two weeks. On July 1st, 1943, the graduating class of 8.000 HJ trainees were released for service in the HJ division. That same day, a second group of 8.000 HJ boys was ready to enter the above training regimen. By the 1st of September, 1943, 16.000 trained HJ recruits were listed on the rosters of the newly formed "Hitlerjugend" division.

1943 was a very critical year for Germany and for the German war effort. This was when Germany had experienced a number of colossal military (manpower) disasters, which could no longer be ignored. In January of 1943, the German 6th Army surrendered at Stalingrad and Germany lost a large number of men in that campaign. That same month, U.S. President Franklin Roosevelt and Britain's Winston Churchill, at the Casablanca conference, declared that the Allies would only accept Germany's (and Italy's and Japan's) unconditional surrender. This had a very galvanizing affect on Germany and the NSDAP - they now believed that they had to win the war no matter what! In May of 1943, the last units of the vaunted Afrika Korps left Africa for good. In July of 1943, the German Army lost its bid for victory at the battle of Kursk and the human losses there were large as well. Italy was ready to surrender. The Allied forces had invaded Sicily and were getting ready to march up the boot of Italy. As a result of these events, new divisions were needed on all of Germany's fronts. Existing and surviving divisions needed replacements - where was the required manpower to come from?

Shortly after Josef Goebbels gave his "Totaler Krieg" speech in Berlin in February of 1943 (as a counter to President Rooselvelt's Casablanca "unconditional surrender" declaration), Germany initiated a new recruitment effort for its military. This recruitment effort was directed against a pool of soldiers, which had so far been left relatively intact - the Hitlerjugend. This was a large source of combat-able individuals who were physically very fit and who were very dedicated to the cause of Nationalist Socialism. They would be obedient to the end. They would blindly give their lives for their beloved Führer, Adolf Hitler.

All of these factors, from the initial concept to create a HJ division to Germany's belated recognition of the fact that it would need additional troops in large numbers, contributed to the expeditious organization and training of the HJ division. On paper, Germany would now be able to factor in one more combat division into its front-line equations by the fall of 1943. Thus, as rapidly as permissible under the existing wartime conditions, the new HJ Panzer Grenadier troopers were assembled at an SS training facility located in Beverloo, Belgium.

That said; it is one thing to place young and inexperienced 17- or 18-year old teenagers into a tank or give them a Grenadiers uniform and then send them towards the enemy at the front lines. It is quite another thing to provide them with the adequate combat and technical skills necessary for them to complete their assigned missions if they are to have any chance of success.

To ensure for the greatest chance of combat success, that is, to attain an adequate mix of seasoned military veterans to young HJ recruits, a number of SS veterans, mostly from the eastern front, were attached to the new HJ SS Panzergrenadier Division. A very large percentage of these experienced individuals came from the 1st SS Panzer Division, the "Leibstandarte Adolf Hitler" (LSSAH). This is why many HJ SS Panzer Grenadier members often carried "LSSAH cuff titles" on their uniforms in the early period. A smaller percentage of Wehrmacht officers, who also had previously been HJ leaders, were transferred to the new HJ SS Panzer Grenadier Division as well. Many of the lower level control and command positions within the HJ SS Panzer Grenadier Division were given to HJ members who had received exceptionally high marks in leadership and military training skills during their days in the HJ before and right after the start of the war.

The first divisional commander was SS Oberführer Fritz Witt, who, when he received this command, was quite young to command a division at only 34 years of age. It is interesting to note that during their "shake down" training period in Beverloo, Belgium, many of the regularly expected training rules and regulations were tossed aside for the new SS troopers. The battle hardened Eastern front SS and Wehrmacht veterans taught the new HJ SS Panzer Grenadiers all they could with the allotted time using realistic combat scenarios amalgamated with many live-fire training exercises. Formality and drill practices were replaced by practical combat lessons. As a result, morale was at very high levels in the entire division throughout their time in Belgium.
After their training period had been completed, during the spring of 1943, they were deemed ready for release to the Western front. Shortly before June 6th, 1944, the HJ SS Panzer Grenadier Division was moved from its training camp in Beverloo to the town of Hasselt, also in Belgium. This is where the HJ SS Panzer Division was held as a reserve unit to help check the anticipated Allied invasion.

On the morning of June 6th, 1944, the Allied powers landed on the coast of Normandy. The Western front now officially existed. As can be imagined, great confusions existed in both the Allied and German military commands. At 1430 hours, June 6th, 1944, the HJ SS Panzer Grenadier Division was ordered to proceed to Caen. This was in close proximity to the British and Canadian landing sites of "Juno" and "Sword". But as soon as the HJ SS Panzer Grenadier Division arrived in the area, they came under heavy and relentless Allied air attacks. As a result, the HJ SS Panzer Grenadier Division did not make it to its assigned attack positions until 2200 hours that night.
Although fanatical in their determination and tenacity to fight to the death, it did not take long for the division to suffer horrendous casualties. In their first engagement with the Canadians, the HJ Division destroyed 28 Canadian tanks while losing only 6 soldiers for their efforts. They fought with a very high degree of determination. However, the odds were against them in the long run. In slightly over one month of combat, the HJ SS Panzer Grenadier Division had lost over 60 per cent of its forces due to combat actions. 20 per cent were killed and the rest of the 40 per cent were either wounded or MIA. The divisional commander, Fritz Witt, was killed when British naval fire hit his regional command center. The new divisional commander became Kurt "Panzermeyer" Meyer. At that time, he became the youngest divisional commander in the entire German army - he was only 33 year of age.

Although the Normandy campaign survivors of the HJ SS Panzer Grenadier Division fought with just as much determination and dedication as they did a month earlier, in the long run, they were fighting a losing battle. By September of 1944, only 1.500-3.500+ HJ troopers survived in the division. They had lost over 9.000 of their comrades in Normandy and in the Falaise Gap. After the Falaise campaign, the HJ SS Panzer Grenadier Division had also lost nearly all of its armor, much of their equipment and heavy weapons.

Soldiers from the division killed 86 civilians in Ascq in France 2 April 1944 in reprisal of sabotage against a train. (5)

During the fighting in Normandy in June 1944 40+ Canadian prisoners were killed by soldiers from different units within the division. (2)
Prisoners from the HJ division captured by Canadian forces were in a few cases killed in revenge of these killings, for example the war dirary of the 7th Canadian Infantry Brigade for 8 July records that "a few old scores" had been settled with the prisoners. (3)

Soldiers from the division killed a civilian who called them "war prolongers" and two Soviet workers for threatening their employer in April 1945. Walter Emil Hermann was post-war sentenced to eight years for these cirmes.

The division was called "The Baby Division" by the Allies, there was also a suggestion that a milk bottle would be a suitable insignia, and as word about the treatment of Canadian POWs in Normandy spread it was sometimes called "The Murder Division".

The "Hitlerjugend" cuff title was authorized for this unit Feb 1944.

The vehicle insignia was a skeleton-key ("dietrich" in German) in a shield chosen after the Corps commander Joseph "Sepp" Dietrich with the addition of the single Siegrunen of the Hitlerjugend movement. When the he was awarded oak leaves to his Knight's Cross oak leaves were painted below the shield. 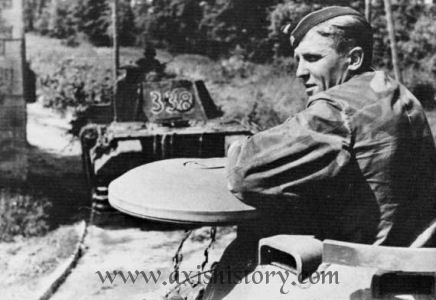 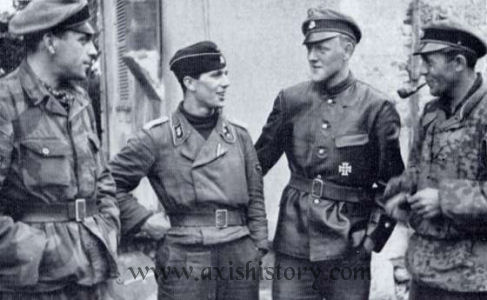 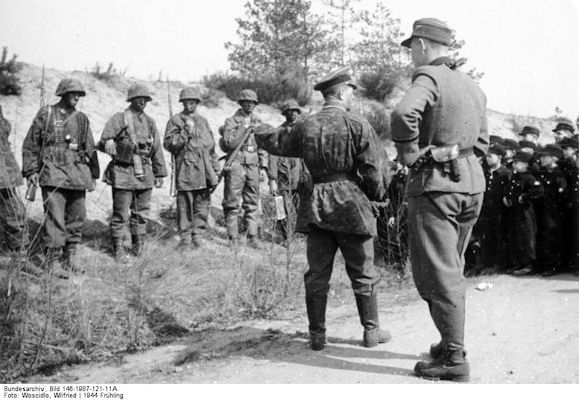 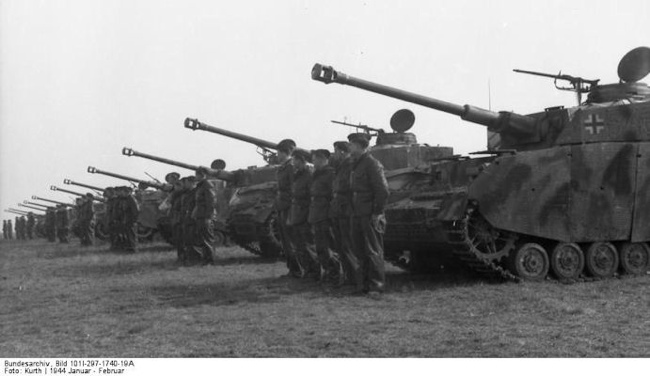 A camouflaged Grenadier of 12 SS HJ in Normandy 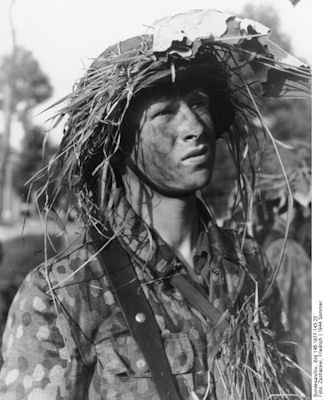 Flakvierling of HJ in Normandy June 1944 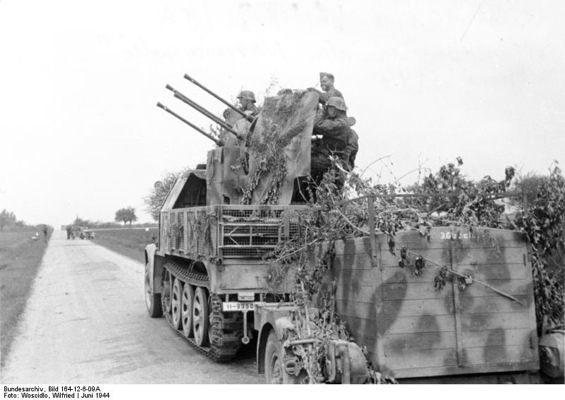 A memorial to the victims of the Ascq massacre 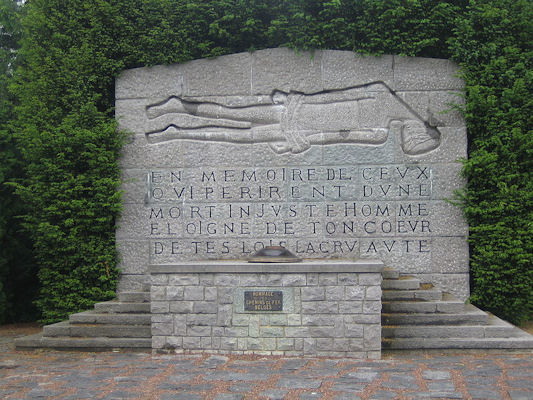 Memorial to Canadian POWs killed in the garden of the Ardenne Abbey in Normandy, France 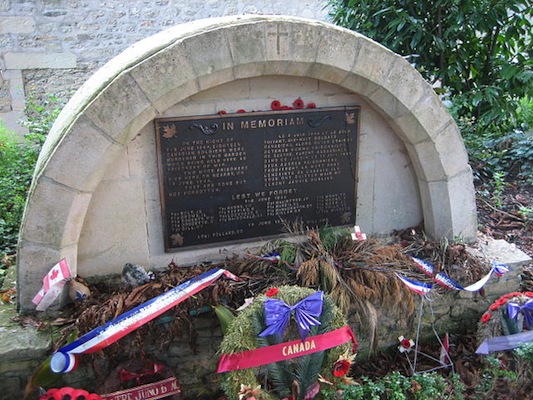