The “ARIETE” Armoured Division was formed in Milan in February 1939 and assigned the numerical designation of 132nd. It was initially organized on the 8th Bersaglieri (motorised infantry) regiment, the 32nd tank regiment (equipped with L3/35 light tanks and a few M11/39 medium tanks), the 132nd artillery regiment, and additional divisional support units.
The division was moved to the French border at the outbreak of World War II, but it was kept in reserve during the short campaign on that front.
Later, some battalions of the 32nd Tank Regiment (the I and II M11/39 Medium tank battalions and, later on, the III and V M13/40 Medium tank battalions) were moved to Libya to become part of the Special Armoured Brigade (named after its Commander, Gen. Valentino Babini) belonging to General Rodolfo Graziani‘s 10th Army.

On the 9th December 1940 the British Western Desert Force started Operation COMPASS, overrunning one after the other the Italian forward positions in Sidi Barrani and Buq Buq (where the II M11/39 tk Bn was lost), then pushing back across the border the 10th Army, occupying in turn the fortresses of Bardia and Tobruch (with the loss of the I M11/39 tk Bn), and endangering the Italian very presence in Northern Africa.
The whole 132nd “ARIETE” Armored Division was therefore sent to Northern Africa, and on the 24th January 1941 the first echelons of the Division (then equipped with 117 L3/33 Light tanks, 24 of which were flamethrowers, organized in three Lt Tks bns – I,  II & III / 32nd Tk Regt – and the VII M13/40 tk Bn – reportedly 46 tks – which had just been attached to the regiment) disembarked at Tripoli and were hastily rushed towards the front, but too late to save Cyrenaica.
The remains of the routed 10th Army, including two tk Bns (III & V M13/40 Tank bns) formerly belonging to the “ARIETE” had been ambushed by UK 7th Armd Div advance guard, made of 2 pdrs AT Guns and Cruiser Tanks and destroyed in the Battle of Beda Fomm.

The Division assembled in the area of El Agheila as a blocking force, along with the first elements of the incoming Deutsches Afrikakorps (DAK) commanded by Generalleutenant Ewin Johannes Eugen Rommel (who was later to become renown as the “Desert Fox”) and took part, operating in different separated columns, in the successful Italo-German offensive that took Mersa el Brega, then overrunning with its advance guard the 3rd Indian Motor Rifle Bde at El Mechili (the first overrun on this "unlucky" Bde), and to the reconquest of Cyrenaica and the siege of Tobruch. It repeatedly faced Commonwealth forces during a series of border engagements (Operations Brevity and Battleaxe), then withdrawn to rest and refit.
It was reorganised by adding the 132nd Tank regiment (formed on the cadre of the 4th tank regt, the VII, VIII and IX M13/40 tank bns), and stationed at Bir el Gubi, to screen the southern flank of the deployment.
It kept on training under the direction of, in turn, Gen. Ettore Baldassarre (later to become Corps Commander) and Gen. Mario Ballotta until 19th Nov 41, when it defeated at Bir El Gubi (the first battle it fought as a Division) the advancing UK 22nd Armd Bde, which was the left wing of what was to be known as Operation Crusader, disrupting its intial timeline. It was then committed in the ensuing defensive battles repeatedly engaging 7th Armored Division and South African forces.
After taking part to the winter battle, during which it fought a series of rearguard engagements, it resumed the offensive during ROMMEL's early 1942, which brought the frontline on the Gazala Line. After being regrouped and refit, in early 1942 it received the V and VI gruppi (the Italian denomination for artillery battalions) of the 132nd Artillery Regiment (up to then organised on the I & II 75/27mm gruppi, III 105/25mm gruppo and the IV gruppo Autocannoni 90/53mm), equipped with M40 75/18mm semoventi (assault gun), which showed to be the best Italian armour in North African Campaign.

It again fought in the Axis attack on the Gazala Line 26th May 1942 where it once again overran the 3rd Indian Motor Rifle Bde at Rugbet Al Atasc, SE of Bir Hacheim. The Division was to cover DAK left flank turning movement, with 101st “TRIESTE” Motorised Division, then accidentally turned into the French position while pursuing the Indian, when a stray tk bn – the VII – after the previous engagement, reportedly lost its way and charged headlong into the Box, suffering severe losses.
After Bir Hacheim, the “ARIETE” took part to the battle of the "Cauldron", when it covered the DAK shoulders, repeatedly and successfully fighting off several British counterattacks at Sidra Ridge and Deir El Aslagh, then resumed the offensive and took part in the feint eastwards and subsequent assault on Tobruch, which fell on 21st June 1942.
The Division turned once again eastwards and kept on the pursuit of the defeated 8th Army with the motorised elements of the Armata Corazzata Italo-Tedesca or ACIT (aka Deutsch-Italienisch Panzerarmee – remind it was 60% made of Italian troops).

“ARIETE” took part in the first battle of El Alamein where it attacked Alam Nayil Ridge held by New Zealand infantry and artillery. The Italian attack was defeated and the “ARIETE” lost most of its equipment (it now only had 5 tanks and one gun) – actually the Division already reduced to a shadow of itself, and had lost about a dozen of artillery pieces and about three hundred bersaglieri infantry to a concentric attack by the whole 2nd NZ Div into an exposed position named Deep Well, where it had penetrated and leaguered the night earlier.
Rebuilt and reorganised (the 132nd tk regt was now made of the IX M13/40 tk bn, plus the X & XIII M14/41 tk bn), it took part in the battle of Alam Halfa Ridge – 30th Aug – where it followed the DAK advance, but the offensive was called off on 2nd Sep. against overwhelming enemy air superiority.

The “ARIETE”, now fielded about 100 tanks and was deployed in reserve in the south, backing up Italian X Corps (17th “PAVIA” Infantry Division and 185th “FOLGORE” Paratroops Division) when Montgomery launched his offensive at El Alamein – 23rd Oct 1942. Held back as the Army reserve, it was then moved northwards during the night of 3rd Nov, to take part in the covering action aimed at allowing the disengagement of ACIT on the following day. It fought bravely but it could only consciously immolate the whole of its about 120 obsolete tanks and semoventi which were destroyed, gaining once again the praise of both enemies and allies.
Around Tell El Aqqaqir, where the 7th Armored Division, equipped with SHERMAN and GRANT tanks, far superior to the poor M13/40 and M14/41 Italian tanks, with the exception of the handful of 75mm gun-equipped semoventi, broke through the Axis lines, the “ARIETE” performed its last, epic stand.
On 4th November at about 15:30, the few surviving tanks, surrounded and overpowered by by an overwhelmingly superior enemy, proudly and defiantly broadcast their last message:

“ARIETE” last stand nonetheless achieved the mission to allow the disengagement of the remains of the ACIT (notably all what was left were a few tanks from DAK and severely depleted motorised infantry elements from DAK, 90th German and 101st Italian Division), holding back Commonwealth Armour which had to regroup, refuel and rearm after the engagement, and laager for the night.
On 21st November, 1942, following the unfavourable wartime events on Northern African Theatre, the Division was disbanded, and its name kept by a Task Force gathering up its remnants, which kept fighting throughout the retreat and subsequent battle of Tunisia, and was later forced to surrender along with the whole of Axis Army in Northern Africa.

The Division was moved to Central Italy following the fall of Mussolini Government and took part to the defence of Rome from 8th to 10th September 1943, counterattacking German Panzergrenadier and Fallschirmjäger (Paratroops) units, and performing a last stand at St. Paul's Gate. The Division once again distinguished itself for its outstanding performance and discipline, at a time when everything seemed uncertain and difficult. Because of the will by Supreme Headquarters to avoid unnecessary sacrifices and losses the Division received the order of surrendering while still holding back the (new) enemy, and was then disbanded.

Before Bir el Gubi the Division was reported on the British Intelligence Italian Army Order of Battle, but never spotted, because it fought as separated individual columns, and therefore christened “the Ghost Division”.
Nonetheless the Formation amazingly demonstrated that it well deserved the name, by being everywhere the fighting was harder, and being rated as the best Italian Division, almost deemed on the same level as the better equipped German formations, and earning the respect of both friends and foes.
The unit was rebuilt after the war (1948), and is nowadays the last Armoured Formation in Italian Army.

A medal with the text ”Divisione Corazzata Ariete / Reconquista della Cirenacia 1941”, known as the The Reconquest of Cyrenaica Medal, was instituted to celebrate the early offensives of the division. 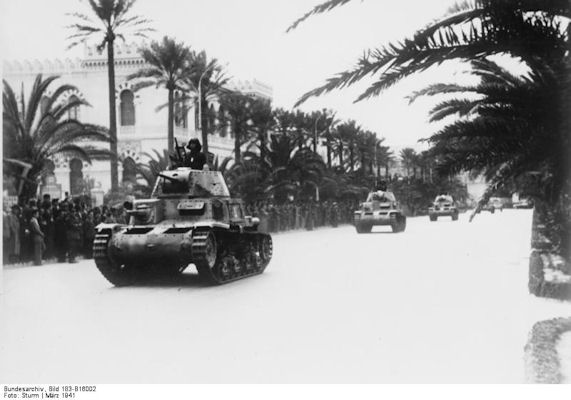 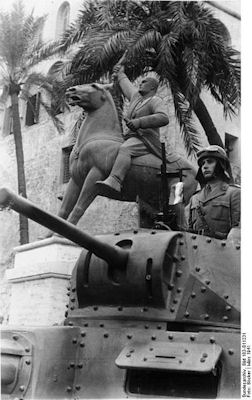