The C.S.I.R. was dissolved on 10 July 1942 to form the XXXV Corps of Generale d’Armata Italo Gariboldi’s newly established Italian 8th Army on the Eastern Front, Armata Italiana in Russia (ARMIR). Messe remained in command of the XXXV Corps until 1 November 1942 when he was succeeded by Generale di Corpo d’Armata Francesco Zingales. On 23 January 1942, Germany decorated Generale di Corpo d'Armata Messe with the Knight's Cross of the Iron Cross for his leadership of the C.S.I.R.


Higher headquarters assignments of the C.S.I.R.

as listed in German Army Kriegsgliederung (Order of Battle).
Note: The C.S.I.R. appears in these documents as the “italienische Schn. A.K.”

On 19 April 1942, the Italian Legione Croata (Croat Legion) arrived at the front and was attached to the 3rd Celere Division.

In May 1942, the 22o Gruppo Autonomo was replaced by the 21o Gruppo Autonomo (Maggiore Ettore Foschini) composed of the 356a, 361a, 382a and 386a Squadriglie equipped Macchi C.200 “Saetta” fighters. (In September 1942, twelve Macchi C.202 “Folgore” fighters plus two photographic-reconnaissance variants joined the group in Russia.) Circa May 1942, the 71o Gruppo Autonomo Osservazione Aerea composed of the 38a and 116a Squadriglie equipped with Caproni Ca.311 and Fiat Br.20 “Cicogna” aircraft replaced the previous air observation group. With the establishment of the Italian 8th Army on the Eastern Front, the air contingent was renamed the Comando Aviazione (or Aeronautica) dell A.R.M.I.R.; it remained under the command of Generale di Brigata Aerea Enrico Pezzi. On 17 January 1943, the 21o Gruppo Autonomo flew its last sorties in Russia and, five days later, began returning to Italy. During its service on the Eastern Front, the 21o Gruppo Autonomo claimed 74 kills and lost 15 aircraft to combat and operational accidents.

On 29 December 1942, General Pezzi was killed in the crash of a Savoia Marchetti SM.81 “Pipistrello” tri-motor transport aircraft after departing from the encircled garrison at Chertkovo. All eight persons on the plane died including Colonnello Prof. Federico Bocchetti, army doctor of the Italian 8th Army.

Italian soldier on the Eastern Front 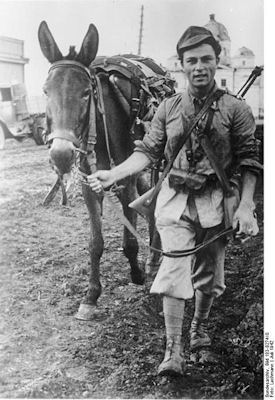