Members of the Wehrmacht, the Waffen-SS, and auxiliary formations of the Third Reich wore the famous Stahlhelm or 'Steel Helmet'. The German Stahlhelm proved to be probably one of the best protective headgear of the Second World War. Its influence on contemporary military and police headgear can be seen today. For example the current American Army helmet, the PASGT Kevlar helmet, bares a striking resemblance to the Model 1935 Stahlhelm. The purpose of this article is to explain the origins, the use of, and other basic information regarding the Stahlhelm and its variants. 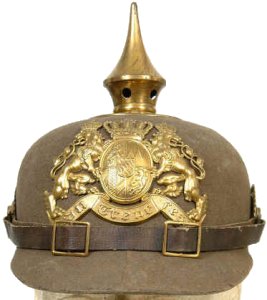 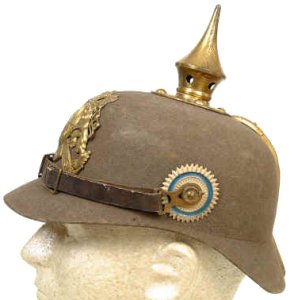 The origins of the Stahlhelm can be traced back to the First World War. The standard piece of military headgear for the German army up until 1916 was the classic Pickelhaube. The Pickelhaube was one of the oldest types of what is now 'new age' military headgear.
Designed in the 19th century the Pickelhaube offered somewhat mediocre protection to the head and neck of the wearer. First introduced into Prussia service in October of 1842 (later into Imperial German military service) the helmet was taken out of German service in 1916 to be replaced by the model 1916 Stahlhelm. 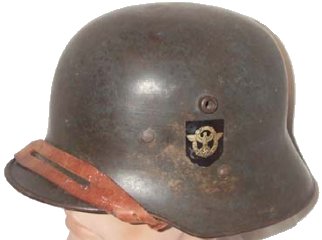 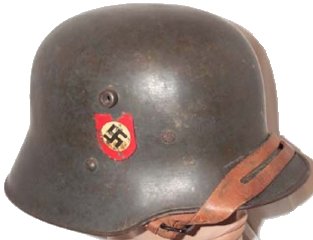 The model 1916 Stahlhelm was a mix between the obsolete Pickelhaube and the French made 'Adrian' helmet. Unlike the ‘Adrian' helmet the M16 was a grey (feld grau) color, rather then a bronze color (this tradition was carried on to all stahlhelms up until 1945). It should be noted that as early as 1915, the German High Command was aware of that the Pickelhaube was obsolete and various 'improvised' headpieces were constructed on the field. One example of a German 'improvised' headpiece is the 'Gaede' helmet. The 'Gaede' was put together by connecting a metal sheet to a German skullcap. The 'Gaede' was developed and put to use by Lieutenant-Colonel Gaede in central France in 1915.

The German Model 1916 Stahlhelm was designed primarily by two men, Frederich Schwerd and Dr. August Bier. By August 1915 the German High Command had approved of the idea of a new helmet. The designs for the Model 1916 were drawn up in September 1915. By December of that year, the M1916 was being used by a Sturm (Assault) battalion for trial purposes, and it showed great potential if some of the design flaws were adjusted. The mass production of the 'Stahlhelm' began January 1916 and it was widely distributed to soldiers in the Imperial German Field Army on the western front. The Model 1916 helmet saw service on both fronts of the war and proved to be quiet successful, except that the wearers hearing was impaired because of the size and shape of the helmet. 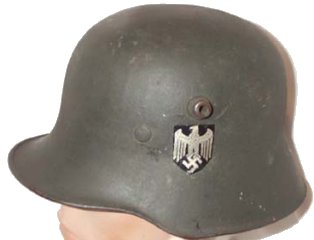 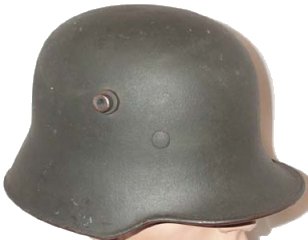 In 1917 the Model 1917 Stahlhelm was manufactured. The M1917 was basically an exact duplicate of the M1916, but with a more defined cutaway area around the ears. Later, in early 1918, the Model 1918 Stahlelm, with a clear cutaway between both ears was introduced to service and saw a limited distribution. Only small numbers were given out until the end of the war.

During the German pre-Wehrmacht period (1919-1935) the Model 1916 remained the most commonly used piece of military headgear in Germany outside of the military sphere. With the Treaty of Versailles' implementation in June 1919, large numbers of Stahlhelms M16, M17, and M18 were destroyed pursuant to the purpose of the Treaty which was to basically crush future German war efforts. In the late 1920's and early 1930's, however, the M16 and the M17 were remanufactured for military and police use. 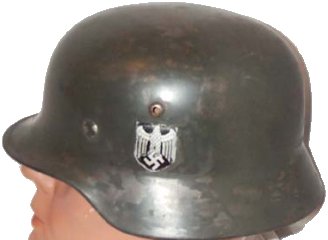 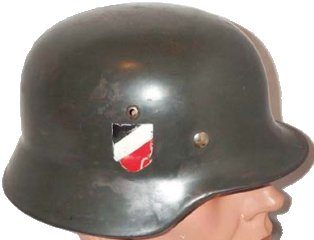 With the re-introduction of conscription and the formation of several new armed service branches (the Heer, Luftwaffe, and Kriegsmarine into a new armed force title the Wehrmacht) a new helmet type was needed to keep up with the modernization's of the country's forces. Therefore the Model 1935 was introduced into German service on July 1, 1935. The sheer weight and size of the Model 1935 didn't vary much from that of the Model's 1916 and 1917 Stahlhelm. A very distinctive feature of the Model 1935 was the crimping of the helmets rim; this was later discontinued for economic reasons. It is interesting to note that large numbers of the M35 were exported to foreign countries in both the Weimar republic and Third Reich periods, particularly to Argentina and China. 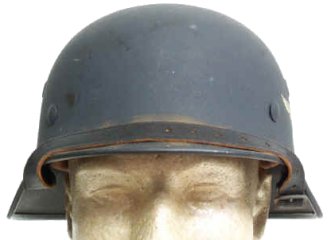 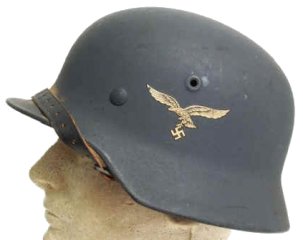 In 1940 a new version of Stahlhelm was produced, the Model 1940. The Model 1940 was almost identical to the model 1935 in every way except that the tri-color shield was removed along with the Wehrmachtadler. The M40's ventilation holes on the sides of the helmet were also increased for maximum combat and production efficiency. The crimping of the rim of the Model 1935 was still in use for this Stahlhelm variation. 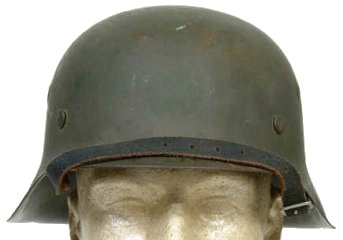 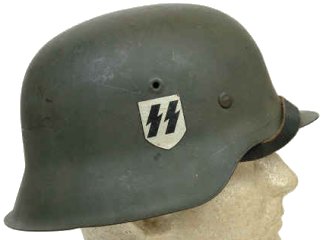 In 1942 another new version of the Stahlhelm came into Wehrmacht service, the Model 1943 (in the United Kingdom, the Model 1942 is usually referred to as the Model 1943.) Because of wartime production troubles and the lack or raw materials, the Model 1943 Stahlhelm was stamped out of only one sheet of steel. This process eliminated the distinctive rim crimping seen in earlier models of the Stahlhelm.
Because of the M43's lack of crimping it had a sharp appearance and the size of the helmets based increased slightly. The Model 1943 Stahlhelm remained in production until the end of the war and saw a wide use by the service branches of the Wehrmacht and auxiliary formations (i.e. HJ squads, Schuma units, etc.).

Though various models of the Stahlhelm was produced throughout World War II no models ever completely vanished from German service. The Model 1935 and Model 1940 Stahlhelms remained in service with various foreign units and both helmets saw a widespread use in the Waffen-SS's 'Freiwilligen' units. The Volkssturm, a troop of under aged and overage aged Germans, also used the older models of the Stahlhelm and even the Model 1916 was used in Volksgrenadier divisions. 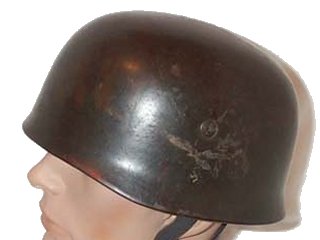 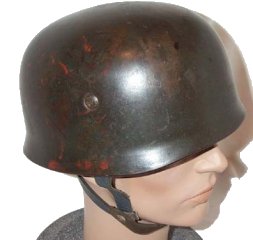 The above discussed the uses of the Stahlhelm in the traditional military and police sense. But the Stahlhelm was also produced for more specialized tasks. For example the Luftwaffe introduced the Fallschrimjaeger (Airborne and Glider borne troops) helmet in 1936. The Model 1936 Fallschrimjaeger helmet didn't differ much from the Model 1935. With the exceptions of its lighter weight and lack of helmet crimping, it basically resembled the Model 1935 Stahlhelm without a helmet rim. There was also more padding in the interior of the helmet to protect the wearer during airborne operations. Another example of a specially designed Stahlhelm is the plastic, extremely light weight Stahlhelms that were produced for use by aged, high ranking soldiers and injured soldiers, for non-combat uses.

In conclusion the Stahlhelm and its different versions proved to be the most effective combat helmet produced during the war. The Stahlhelms gave more than adequate protection to the wearer and prevented most forms of shrapnel from injuring the wearer. It's light weight gave the wearer maximum mobility and proved excellent for fast paced operations, perfect for the blitzkrieg tactics employed by the Wehrmacht in the Second World War.