1941 - The 1. SS-Infanterie-Brigade (mot.) was formed on 21 April 1941 from surplus SS personnel of the SS-Totenkopf-Standarte 8 and the SS-Totenkopf-Standarte 10. Originally the unit was known as the SS-Brigade (mot.) but was later renamed to 1. SS-Brigade (mot.) and finally to 1. SS-Infanterie-Brigade (mot.) on 20 September 1941. On 25 June 1941 the unit came under the command of SS-Oberführer Richard Herrmann, who was reassigned from KG Nord. When the Russian campaign started in the east the unit was in Krakow, Poland where it was still organising itself. On 5 July they departed to Debica where they received further training until 23 July. After that the Brigade marched east. In the period from 25 July to 9 August 1941 the unit fought partisans and Red Army stragglers in the rear of Heeresgruppe Süd, capturing some 7000 men. On 9 August the Brigade found itself 35 km north of Shitomir. At that time the 6. Armee was fighting on the front from Korosten to Berdistchev and needed the SS Brigade to assist in its northern flank in the Pripet. At the same time the Brigade's SS-Infanterie-Regiment 10 would carry out an anti-partisan sweep near Uschomir. The clearing of the swampy terrain was going on from 10 – 16 August. The number of- captured or killed enemies by the regiment in that engagement reached some 800 men. When they rejoined their parent unit, the Brigade operated behind the left wing of XVII Armeekorps. On 23 August the Brigade crossed the river Dnieper after the daring actions of the 11. Panzer-Division. Throughout the 1941 until late 1942, they were assigned to the Kommandostab RFSS, which also had the SS-Kavallerie Brigade and the 2. SS-Infanterie-Brigade (mot) under its command. The purpose of the Kommandostab was to use these SS units under its control in a police role, independent of all Army, SS or Polizei officials in the rear areas. Although they were used as a front line unit and placed under Heer command in times of crisis on the front – they were always returned to the Kommandostab after the operations were over. They were detached from that command in autumn 1942 and left the anti-partisan role to other units under the Chef der Bandenkampf Verbände. Some of the subunits of the Brigade also actively took part in the Holocaust while assisting Einsatzgruppen C in the mass shootings of the Jewish population of the Soviet Union. These executions were often in tight related to the anti-partisan sweeps that the Brigade made. On 12 December 1941 the Brigade was placed under the command of the 56. Infanterie-Division on the orders of Heeresgruppe Mitte in order to help close a gap, which appeared in the front of the 2. Armee, when the Red Army encircled the Höheren-Kommando XXXIV in the area Tula-Yelets-Liwny. The operation was successful and the 134. Infanterie-Division and 45. Infanterie-Division were freed from the encirclement. During the fighting around Lasarewka, the Brigade became a part of Gruppe Moser on 28 December 1941 and placed under the command of LV Armeekorps.

1942 – After the hard defensive battles of the winter, the Brigade received new orders to be deployed as a second-line security / anti-partisan unit and later saw more front line combat. The Brigade’s casualties amounted to 1306 men (KIA: 20 officers, 306 NCO's and men, WIA: 38 officers, 805 NCO's and men, MIA: 4 officers, 119 NCO's and men, Accidents:1 officer, 13 NCO's and men) by 31 May 1942. From January to August they mostly participated in security and defensive duties around the area of Kursk. On 11 August the unit was sent to the Minsk area to fight the partisans which started to seriously affect the rear areas of Heeresgruppe Mitte. On 11 October 1942 the unit found itself in in Wydriza, Central Russia (where Von dem Bach-Zelewsky was the HSSPF at the time), where it participated in an anti-partisan operation ''Karlsbad'' (starting on 11th November) along with the SS-Sonderkommando Dirlewanger, Litauische-Schuma-Bataillon 255 and units of the French LVF 1st Battalion (at this time a part of the 286. Sicherungs-Division). The goal of the operation was the annihilation of a group of 6000 well armed and trained partisans lead by soviet officers. By the end of the sweep on 23 October, the Brigade had 24 fallen and 65 wounded men while killing some 1051 partisans and civilians. From 5–9 November 1942 the Brigade was involved in another anti-partisan operation named ''Frieda''. Together with the SS-Sonderbataillon Dirlewanger the Brigade was tasked with the destruction of a powerful partisan group under General Wiejerew in the swampy forests south of Borissov. The reported casualties in the operation were light with 2 men killed and 10 missing in contrast to several hundred claimed dead partisans. Afterwards the Brigade received some rest before going off to new anti-partisan sweeps in the second part of- November with Polizei Kampfgruppe von Gottberg. The next operation; "Nürnberg" lasted from 19-25 November 1942 and took place between Gleboki and Wilna. The action was led by SS-Brigadeführer von Gottberg with SS-Polizei Regiment 14, two Schuma bataillons and a town Gendarmerie unit in support of the SS-Brigade. The Russians suffered 2984 casualties and some German prisoners were freed. During the end of 1942 the Soviet forces encircled the town of Velikiye Luki and tried to annihilate the German forces in that area. The German 83. Infanterie-Division with other units became trapped in the pocket and was destroyed in January 1943. The 1. SS-Infanterie-Brigade, along with Freikorps Danmark, participated in the attempts to break the encirclement under Gruppe von der Chevallerie and suffered heavy casualties in the process.

1943 – Following the various anti-partisan operations in the end of 1942 and the heavy fighting around Velikiye Luki, the 1. SS-Infanterie-Brigade became a part of the LIX Korps under the 3. Panzer-Armee. On 4 February they held postions in Podluschje. From 22 February to 8 March the Brigade became attached to the 201. Sicherungs-Division with the orders to fight the partisans in the area of Witebsk-Gorodok-Gurki-Senniza Lake. The name of the fist sweep was "Kügelitz". The second operation, lasting from 31 March to 2 April, was "Donnerkeil" and was carried on the orders of the 3. Panzer-Armee. On 20 March 1943 the SS Freikorps Danmark was deteched from the Brigade. In May 1943 the Brigade formed a cadre for the 3. Estnische SS-Freiwilligen Brigade. On 7 July the Brigade was sent to Borrissov again to fight many small partisan groups in the area. They participated in operation ''Hermann'' on 7 July with various other units under the command of Generalmajor der Polizei von Gottberg. By August 1943 the Brigade received 10 StuG in addition to its forces. On 1 August the Brigade took part in a great evacuation of the area Jeremicze-Starzyna-Rudnja-Kupinsk. The goal of the undertaking was to evacuate and deport the populace in the area - disabling them from helping partisans and to provide the workforce for the German war industry. Due to another crisis on the front the SS-Brigade saw action again as a front line unit placed under the 25. Panzergrenadier-Division in the beginning of September. They were fighting the advancing Soviet forces in line Smolensk-Gomel and abandoned Smolensk on 24 September. The losses in September alone were high (215 KIA, 1172 WIA and 77 MIA). In the proceeding fighting west of Smolensk the Brigade made good performance and was mentioned in the Wehrmachtsbericht on 15 October while being positioned in the center of the front. On 22 October 1943 the Brigade’s subunits received the unit number 51. On 12 November the former- SS-Infanterie-Regiment 8- & SS Infanterie-Regiment 10 became known as the SS-Grenadier-Regiment 39 and SS-Grenadier-Regiment 40 (after being named SS Grenadier Regiment 37 & SS Grenadier Regiment 38 for a short time in October 1943). Because of the great Russian offensive on 10 November the unit was used to form an SS-Kampfgruppe Trabandt and placed under the staff of the 36. Infanterie-Division. They fought in the Rogatschew bridgehead until they were transferred to the bridgehead at Stassewka on 2 December. On 20 December 1943 the Brigade took part in operation "Nikolaus" and formed the 9th Army’s pincer attacking south towards the 2. Armee alongside with 16. Panzer-Division, 258. Infanterie-Division, 134. Infanterie-Division and Kavallerie Regiment Mitte. The counter-attack filled the gap between the 2. Armee and the 9. Armee which was created by the Russian push towards Bobruisk in November that year. The pincers succesfully closed on 22 December 1943 and the front was once again stabilised. With the end of December 1943 the Brigade was ordered to move to East Prussia. After they reached the troop training grounds Stablack near Konigsberg they were reformed.

1944 – The 1. SS-Infanterie-Brigade (mot) existed until 24th January 1944 when it was used for the forming of the 18. SS Freiwilligen-Panzergrenadier-Division Horst Wessel.

At least three Norwegian were killed while serving with the brigade.

SS-Untersturmführer Max Täubner commanded a workshop detail in the brigade and was tried by an SS court in May 1943 along with four other Waffen-SS men for unauthorized and sadistic killings of a large number of Jews in 1941 and for taking photos of the killings showing them to wife and friends. In the verdict the SS court states "The accused allowed his men to act with such vicious brutality that they conducted themselves under his command like a savage horde". (1) The case was dismissed by the judge SS-Standartenführer Dr. Reinecke. The photos and negatives were later ordered to be destroyed. 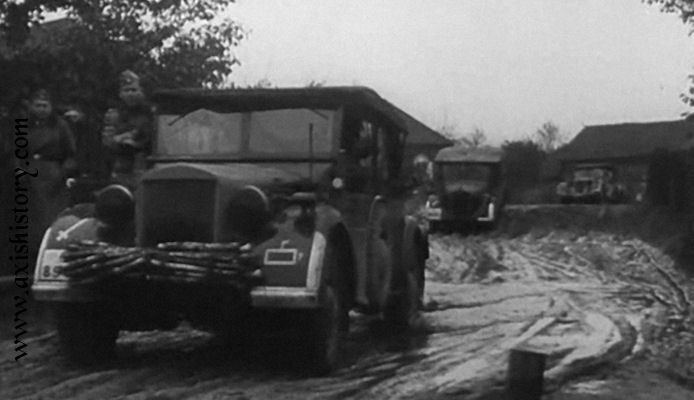 Soldiers of the brigade in 1944 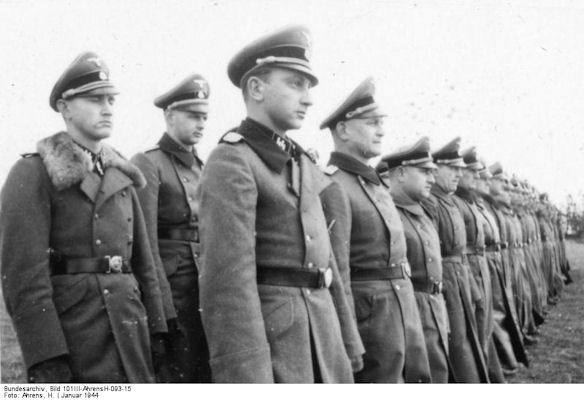 1. "Valhalla's Warriors: A history of the Waffen-SS on the Eastern Front 1941-1945" by Terry Goldsworthy, page 60.
2. "Murderous Elite: The Waffen-SS and its complete record of war crimes" by James Pontolillo, page 45.