The 17. SS-Panzergrenadier-Division Götz von Berlichingen was raised October 1943 from replacement units and conscripts.
It saw action against the US forces in Normandy from 10 June 1944 and suffered heavy losses. The surviving parts of the division refitted in the Saar during Sep and took of manpower from Heer and Waffen-SS stragglers.
It fought around Metz in October and Novenber before once again retreating to the Saar, seeing action there in December. It fought in Lorraine 1945 during the Nordwind offensive and in Mar it retreated towards Nuremburg.

Small elements from the division are believed to have been involved in the so called "Battle for Castle Itter" on 5 May 1945, a grand name for a small operation to recapture the Austrian Itter Castle in North Tyrol that had been captured by the US forces the day before. Its claim to fame is that part of the 41 men strong force defending the castle were 7 US soldiers from the 23rd Tank Battalion of the US 12th Armored Division, 14 French VIPs who had been held at the castle and 20 Germans.

Back in Kufstein, Lee picked up his reinforcements -- two tanks from his own outfit and five more from the 36th Infantry Division's 142nd Battalion. With Lee and Szymcyk went Lieutenant Harry Basse, Santa Ana, Cal., maintenance officer and the tanks' crews. At the town of Worgl the force paused. Lee, leaving the others behind, took his own medium tank with five volunteers, said goodbye to his rear-guard, and rumbled on to the castle, the faithful major trailing in his car.
Then began the classic defense of the ancient "schloss", which had not known battle since the days of crossbow and boiling oil. The defenders numbered 41 -- there were 20 soldiers of the Wehrmacht (German regular army), 14 French men and women, and seven Americans.
At 4 o'clock on the morning of May 5, a small force of SS men launched an attack up the slope toward the castle. American rifles and German light machine guns teamed up to beat them back. (5)

The survivors surrendered to US forces in Bavaria at the end of the war.

Soldiers from this unit were involved in the killing of two American airmen in Montmartin en Craignes, France, 17 June 1944. Erwin Schienkiewitz was sentenced to life imprisonment for this crime in 1947.

In Graignes 25 wounded paratroopers from the 3rd Battalion, 507th Parachute Infantry Regiment, 82nd Airborne Division and 30 civilians were killed after the village was captured by 2. Bataillon of the SS-Panzergrenadier Regiment 38 under the command of SS-Sturmbannführer Nieschlag after two days of heavy fighting. (2)

Soldiers from this division are believed to have been responsible for the massacre in Maillé, France, on 25 August 1944 when 124 civilians were killed, this has however not been confirmed. (3)

Two soldiers were convicted post-war for shooting a civilian in Ebrantshausen, Holz for possessing a white flag on 28 April 1945.

One soldier of the division was accused post-war of shooting the Mayor of Burgthann for defeatism in the final days of the war and another one for shooting a Jewish dentist.

Oberst Dr Friedrich August Freiherr von der Heydte was CO of the Fallschirmjäger-Regiment 6 during the Normandy campaign and the below is a transcript of a secretly monitored conversation of him talking to other captured German officers in early 1945.

Another instance was the interrogation of an American captain. A battalion commander of mine was present and he rang me up from the battle headquarters of an Obersturmbannführer Pick [CO of 37th SS Panzergrenadier Regiment, 17th SS Panzergrenadier Division] — where the chap was interrogated — and said: ‘Please come here at once, Sir. There’s been some dirty work here.’ I thought that the enemy must have broken through or something, so I drove over there, and then he told me the following — I saw the unconscious officer lying there myself. A few people were sprinkling water over him. They had apparently stood him on a box up against a tree, tied his hands up behind him and then kicked the box away and interrogated him like that. That is contrary to all military honour. (4)

Götz von Berlichingen (1480 – 1562) was a knight immortalized by Johann Wolfgang von Goethe’s play of the same name. Von Berlichingen is also well known for his iron fist, a prosthetic appliance, which he received after he lost his hand during the Bavarian War of Succession in a battle near Landshut in 1504. This iron fist was also adopted as the symbol in the division’s shield.

The tactical marking of the division was the mailed fist of the knight Götz von Berlichingen.

The "Götz von Berlichingen" cuff title was authorized for this unit Oct 1943. 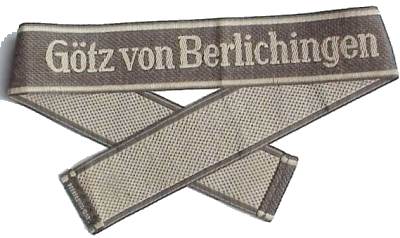 Directed by Mikael Salomon, the third episode of the 2001 TV miniseries "Band of Brothers", entitled “Carentan,” features an attack by armor and troops of the Götz von Berlichingen Division.

Soldiers of the Götz von Berlichingen division in France 1944 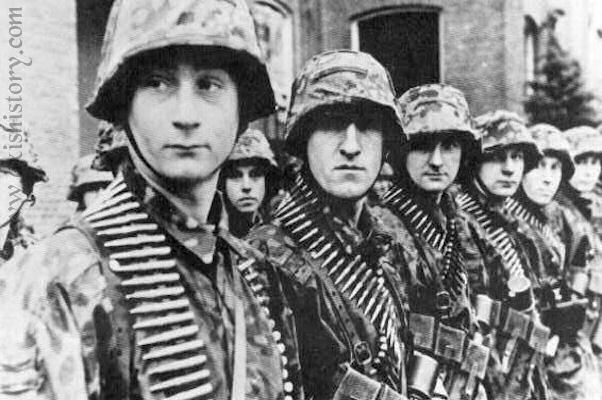