The Britisches Freikorps (British Free Corps) was formed in January 1943 as the St. Georgs-Legion and was made up of British and Commonwealth volunteers. The forming of a British legion was first suggested by John Amery, son of Leopold Stennet Amery, Secretary of State for India in Winston Churchill's war cabinet, who also made a failed attempt to find volunteers for the unit.
Himmler became interested in the concept and a renewed attempt to find volunteers were made, but only approximately 30 soldiers volunteered for this unit (including 3 Canadian, 3 Australians, 3 South Africans and 1 New Zealander).
It was renamed Britisches Freikorps in January 1944 and attached to III SS Panzerkorps in February 1945. The unit never saw any action but a few men from this unit are believed to have fought in the battle of Berlin attached to 11. SS Freiwilligen-Panzergrenadier Division Nordland.

William Celliers, a policeman from Windhoek in Namibia, and James Conen, a taxi-driver from London served as auxiliary troops (hiwis) in the flak detachment of Leibstandarte SS Adolf Hitler in the fall and winter 1943-44 until the LSSAH was sent to the Western Front, both were awarded with the Iron Cross 2nd Class.
Other British volunteers include Railton Freeman in SS-Standarte Kurt Eggers and Frank Becker who served as an interpreter in Legion Freies Indien.

The "British Free Corps" cuff title was authorized for this unit.
The collar tabs used in this unit shows three lions (sometimes incorrectly given as leopards due to the heraldic term leopard used to describe the posture of the lions).
An armshield with the Union Flag was also used.

The below proclamation was written by John Amery when the Legion of St. George, later renamed British Free Corps, was founded.

150,000 of our fellow countrymen are in prison in the home country, because they have declared themselves against this fracticidal war. In violation of the Habeas Corpus Act and the fundamental laws of our constitution these men have never been brought to trail or even allowed to see a lawyer.
American troops have not only occupied Ulster but are arriving in increasing numbers in England. Naval bases and Colonies have been handed over to Mr. Roosevelt's administration.
BEYOND ALL THIS
This war has ceased to be a war of nations but has become a war of
CONCEPTION
Europe and our country, your wives and children at home are menaced by the invasion of the HORDES OF BOLSHEVIK BARBARITY.
For this reason I have approached the German Government with the proposal to form A BRITISH LEGION AGAINST BOLSHEVISM, to be known as the LEGION OF ST. GEORGE.
I appeal to all Britishers to answer this call to arms for the defence of all the principles that we Englishmen have been the first to proclaim in the world. THE DEFENCE OF OUR HOMES, OF OUR CHILDREN AND OF ALL CIVILISATION AGAINST THE DRAGON OF ASIATIC AND JEWISH BESTIALITY. The St. George Legion will fight only against the Communists and on NO OTHER FRONT!
All men will commence in their present rank and promotion will be open to all men alike, without any distinctions or qualifications, political or otherwise.
Within the limits of the military possibilities the Legion of St. George will fight at the junction of the German-Finish front, beside the troops of the undaunted liberty loving Finish people.

The British Representation in Berlin formally guarantee to all ranks: A PERMANENT WELL PLACED JOB IN THE BRITISH ADMINISTRATION OR A PRIORITY IN ANY OTHER EMPLOYMENT THEY SHOULD DESIRE ONCE PEACE IS SIGNED, OR THE POSSIBILITY TO FORM THE ELITE IN THE NEW BRITISH ARMY.
Hundreds of soldiers have volunteered to join this Legion.
Men who have escaped to England have come to join us.
Three Royal Air Force aeroplanes have come over to us so far with their arms and equipment. It is up to you civilians to give a hand to show that we intend to take our responsibilities to maintain THE INTEGRITY OF OUR EMPIRE, by giving the world proof that we have not all sold out to the JEW or PLUTOCRAT.
I ASK YOU TO OPT NATIONAL
The British Representative which is a 100% British organisation will take no steps whatever of intimidation against the persons who do not opt, BUT fellow countrymen the world is watching us, EUROPE EXPECTS THAT EVERY CIVILISED MAN WILL DO HIS DUTY, National England desires that you will show yourselves worthy of Nelson's immortal signal:
"ENGLAND EXPECTS THIS DAY EVERY MAN WILL DO HIS DUTY"
Your place is with us Nationalists ... Your duty is to opt NATIONAL under the glorious banner of St. George we are going to write a new page in the History of the British Empire: more, WE SHALL SAVE THE BRITISH EMPIRE FROM COMMUNISM AND AMERICAN RAPACITY.
We shall show the world that free Englishmen:
NEVER, NEVER WILL BE THE SLAVES OF A JEWISH PLUTOCRATIC TYRANNY, THAT WE ARE WORTHY DESCENDANTS OF THE YEOMAN THAT DICTATED THE MAGNA CHARTA.
Pay no attention to waverings or opposition: the first to opt will be the examples of bravery and courage to those that now waver or are against us but who will have to join us one day when they realise all the truth.
In these fatal days when we are before the bar of civilisation: I beg, I demand, that you put aside all hesitations, all the prejudice, all the lies that have led you where you are ... that you take this IMMENSE OPPORTUNITY THAT I HAVE OBTAINED AND WITH ME, WITH ALL THOSE THAT HAVE ALREADY JOINED.

YOU WILL OPT NATIONAL ... FOR ENGLAND AND ST. GEORGE! 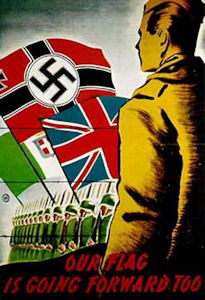 The novel "The Eagle Has Landed" by Jack Higgins features a BFC Officer named Harvey Preston, based on Douglas Berneville-Claye, who joins the Fallschirmjäger unit attempting to kidnap the British Prime Minister Winston Churchill. The character was not included in the 1976 movie with the same name directed by John Sturges.

The episode "The Hide" (#22, 7:3) of the TV-series "Foyle's War" features a soldier from the free corps being tried for treason.


Kenneth Berry and Alfred Minchin of the BFC 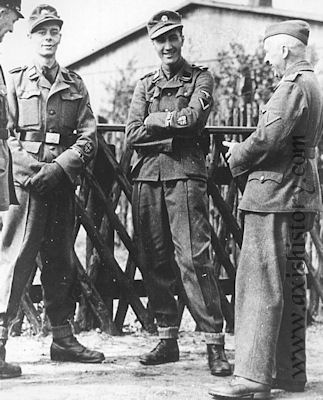 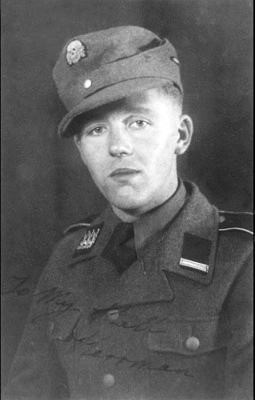