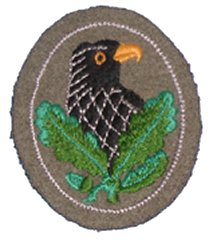 Awarded to soldiers serving as snipers.

These badges were most likely never awarded, only mentioned in the recipients soldbuch.