The 11. SS-Freiwilligen-Panzergrenadier-Division Nordland was formed in 1943 to combine all the Scandinavian and Dutch volunteer formations, but the Dutch did in the end not end up in Nordland, instead it contained a majority of volksdeutsche (ethnic Germans) and a minority of Scandinavians.
It was sent to Croatia in September 1943 for training where it was also used to fight partisans. It was sent to the Oranienbaum front near Leningrad in November and December 1943 and suffered heavy losses during the Soviet offensive in January 1944, fighting on the Luga River and at Narva before retreating to the Tannenberg Line July 1944 where it remained until September 1944 when it retreated into Latvia seeing action in the Kurland battles.
It was transferred to Pomerania in February 1945 where it fought until 19 March when it was evacuated and sent to the Oder front. Much of the surviving parts of Nordland were caught up in the battle for Berlin and only a few suvivors managed to break out of the city.
The surviving elemets of the divisions surrendered to the western Allies at the Elbe river.

Pukovnik Stjepan Peričić, the commander of the Croatian I Mountain Brigade reported in a letter that an SS unit had killed 100 people in Popovaca on 16 September 1943 following an attack by partisans, the killed included civilians as well as partisans. This incident occurred in the area controlled by units of the Nordland division. (2)

The name “Nordland” translates as “Northern Land” and was chosen as this formation consisted mainly of “Germanic” SS volunteers. This division inherited its name from the regiment of the same name, which was transferred in from the “Wiking” division. The “Nordland” division was originally intended to receive the name “Waräger” (= Vikings, see also 5th division “Wiking”) but that name was rejected by Hitler himself, who wanted the division to keep using the already-existing regiment’s name.

Three of the division’s units were also named:
SS-Grenadier-Regt. 23 „Norge“
“Norge” is Norwegian for “Norway”; the regiment received its name because it was composed mainly of Norwegian SS volunteers.
SS-Grenadier-Regt. 24 „Danmark“
“Danmark” is Danish for “Denmark” and was adopted as the regiment’s name because it consisted of Danish volunteers.
SS-Pz. Abt. 11 „Hermann von Salza“
Hermann von Salza (1170 – 1239) was the Großmeister des Deutschritterordens (Grand Master of the Order of Teutonic Knights) from 1209 until his death and a close associate of Emperor Friedrich Barbarossa. An extraordinarily capable diplomat and leader, he is recognized as the most important Grand Master of his order. The order, which is also known as the Deutscher Orden and the Deutschherren, was founded in the late 1190s during the crusades and was heavily involved in eastern expansion and, at the peak of its power in the mid-14th century ruled, among others, Prussia, Estonia and Courland. (Which is also the reason why the heraldic shield of the Grand Master of the Order of Teutonic Knights was incorporated into the design of the “Kurland” cuffband, the Third Reich’s last instituted campaign award.)

Kurt Gildisch (Commander of the SS-Begleitkommando des Führers, Hitlers bodyguard unit, 1933-1934, served in Nordland after he was expelled from the SS and NSDAP for his drinking. Sentenced to 15 years in prison post-war for the murder of Catholic politician Erich Klausener during the Night of long knives)
Niels Kryssing (Son of SS-Brigadeführer Christian Peder Kryssing, a Dane who was the highest ranking non-German in the Waffen-SS)
Hans-Gösta Pehrsson (Swedish volunteer and commander of the so called Schwedenzug, the highest ranking Swedish volunteer in the Waffen-SS)
Erik Wallin (Swedish volunteer on whose experiences the book Ragnarök, Twilight of the Gods, is based)

The tactical marking of the division was a "Sonnenrad", a sun wheel swastika, inside a circle.

A sonnenrad swastika (sunwheel) was to be used instead of the SS runes on the rollar tabs but the SS runes were often used. 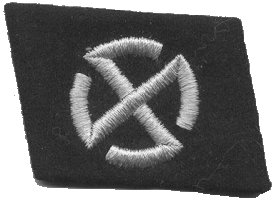 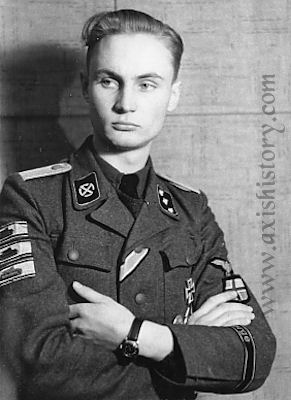 The vehicle insignia was a sunwheel swastika.

A well known photo of a destroyed SdKfz 250 belonging to Nordland in Berlin 1945, it is belived to be the command vehicle of SS-Hauptsturmführer Hans-Gösta Pehrsson, commander of the so called Schwedenzug, the "Sweden Platoon", and the dead driver SS-Unterscharführer Ragnar Johansson. 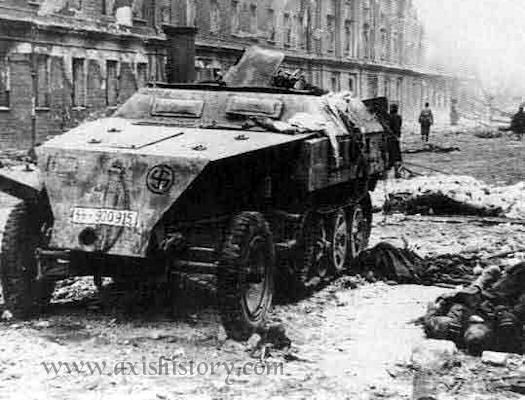 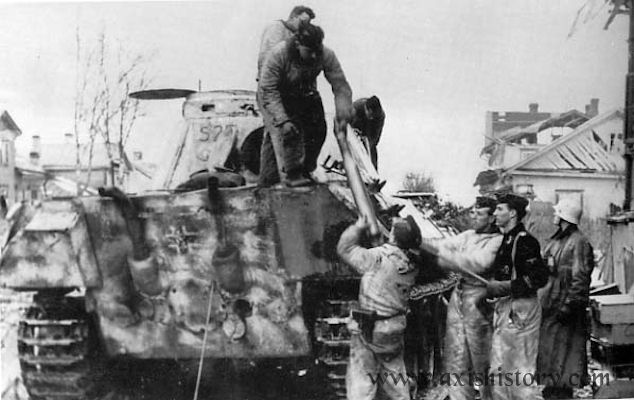 The 2000 crime novel "The Redbreast" (original Norwegian title "Redstrupe") by Jo Nesbø includes a backstory dealing with Norwegian volunteers in the "Norge" regiment.

1. The 4. Zug of the 3. Kompanie is often referred to as the Schwedenzug, the "Sweden Platoon". A total of 26 Swedes and 18 Estonia-Swedes served in that platoon with an additional five Swedish war correspondents being attached to it. It was commanded by the Swede Hans-Gösta Pehrsson.
2. Document D-578, from the Nazi Conspiracy and Aggression volumes, Supplement A: Closing Address, Closing Arguments, Closing Statements; Documents Introduced in Evidence By British and American Prosecutors, US Government Printing Office, District of Columbia:1947, pp. 889-91.
3. Joachim Ziegler was relieved of command and placed under house arrest on 25 April for "defeatism" when it became clear that he was avoiding to sacrifise his division in a futile defence of Berlin.